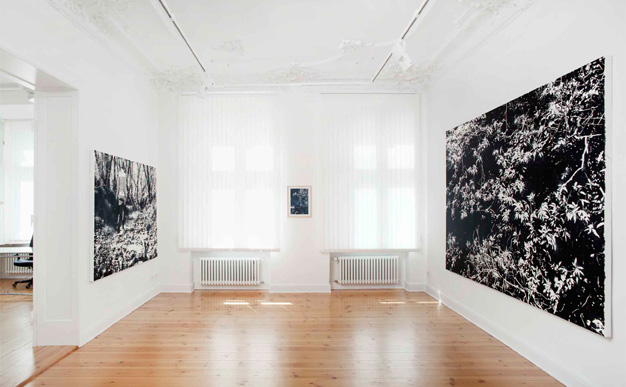 
TS art projects is a Berlin-based gallery that concentrates on contemporary up-and-coming artists working at an international level. The gallery was founded in 2012 and has since then organized 16 curated and solo exhibitions. The first exhibition under the name of TS art projects was a solo show with Nigerian artist Temitayo Ogunbiyi in January 2012 in association with the Freies Museum Berlin. TS art projects gallery space opened its doors in June 2012 with a solo exhibition by German artist Jan Davidoff. In August 2012 the gallery became an official member of the German gallery association (BVDG). The third show was a solo exhibition by Russian artist Danja Akulin. From October till December 2012 English photographer Danny Croucher has been shown at TS art projects during the European month of Photography. 2013 started with a two-week exhibition by the German artist Jan Davidoff releasing his new art book “Naturalisation,” which was published by Kerber Verlag. The solo exhibition “Localisation” by the Brazilian artist Cristina Barroso followed, with a wonderful exhibition statement by Werner Meyer, director of the Kunsthalle Goeppingen. TS art projects was than very pleased to welcome the two-month exhibition “a hole in the empire” by the Swedish artist Bo Cristian Larsson, which started during the Berlin Gallery Weekend. Cornelia Renz and Joseph Cavalieri showed their outstanding glassworks during Berlin Art Week in September. The “Late Night Show” was underlined by an exhibition statement by Dr. Heike Fuhlbrügge. Furthermore, a recorded artist talk between Cornelia Renz and Dr. Heike Fuhlbrügge can be seen online. Last but not least, the year ended with the group exhibition “Betwixt and Between” by Takahiro Ueda and Toshihiko Mitsuya from Japan and an exhibition statement by Bogna Grazyna Jaroslawski. February 2014 started with the curated exhibition “When Empty Self Becomes Form” by the Japanese art historian Shinya Watanabe, and including the Japanese artist Noriko Ambe, the Polish artist Michal Martychowiec, and the former USSR artist Viktoria Sorochinski. Recorded artist talks can be seen online. The site-specifc installation “A White Mess” by Bo Christian Larsson, which was part of “The Listening Room” project by the former Berlin-based collective Soundfair, was set up during Gallery Weekend 2014. The exhibition that followed – “Grooving Images” curated by the German curator Birgit Sonna – directly referenced the previous show “Castaway” by exploring how sound and music can be a part of visual arts. It included artists such as Tom Früchtl, Bo Christian Larsson, Catherine Lorent, and Michael Sailstorfer. In September that year, Maryna Baranovska gave us an inside view of her “Marvelous World,” underlined with an exhibition statement by Tina Sauerländer. Works on paper by the exciting artists Thomas Zipp, Bo Christian Larsson, Catherine Lorent, Cornelia Renz, and Jan Davidoff heralded the end of the year 2014.