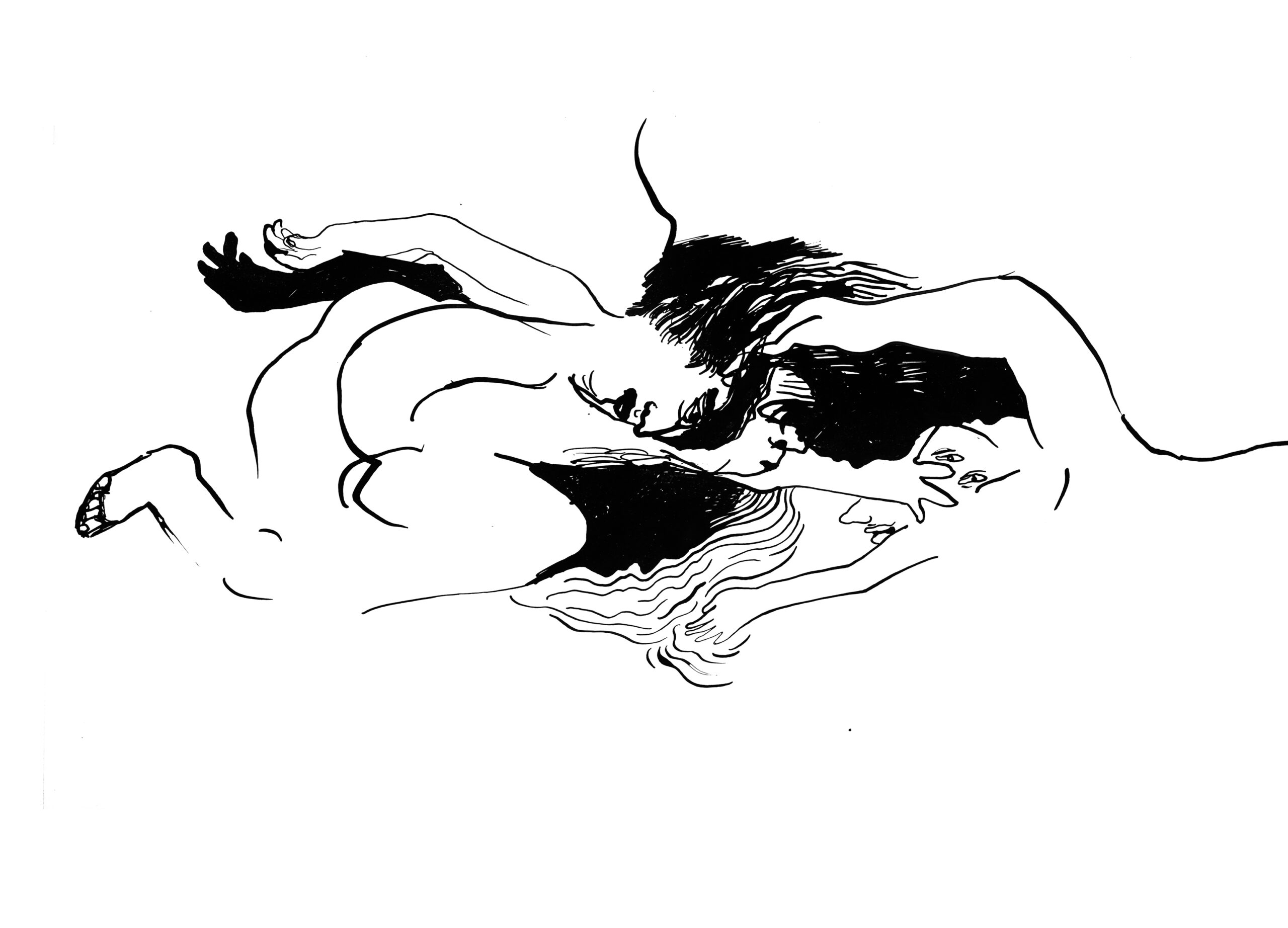 For her first solo exhibition at HilbertRaum, Eva Pedroza is presenting 10 works from her new eponymously-titled series, Black hole, as well as watercolour paintings from her ongoing animation project Tako Tsubo – a collaboration with author Fanny Sorgo which started in 2017.

The Black hole works comprise a series of 10 ink drawings on paper, and one large-scale digital print. Dramatizing zoomed-in, intimate encounters, an interweaving of darkness and light reveals bodies engaged in sex as much as mutual strangulation. Pedroza’s handling of positive and negative space creates a sense of movement. These bodies are spilling past an event horizon – toward a singularity bereft of pain, where an intimate connection between living beings is nevertheless possible.

The paradoxes implied by singularity are intuitively recast by these ambiguous forms. The figures depicted intertwine, dissolve, and find their own autonomous rhythm at the cusp of drops of black ink. Pedroza’s chosen medium points back to the presence of the artist, whose subconscious and intuition filters into these swirling bodies.

Tako Tsubo also reflects on our instinctual need for darkness. These watercolor on paper works, with their striking color schemes and narrative qualities, became used as frames for a stop-motion animation video made in collaboration with Fanny Sorgo. Several scenes depict Ham, the protagonist of the series, holding his own heart, which he cuts out to lessen the burden of emotions. Despite undergoing this surgery intentionally, he finds himself frequenting a dark forest where a hole delineates where his heart once was. The mingling of stillness and vacuum-like tranquility that Ham seeks out corresponds to the fate of Pedroza’s ink figures, silently pushing past the limits of the known universe.

In both series, Pedroza deals with Nothingness not in a negative sense, but as a quiet place which is essential for growth: … on every occasion when the state of a thing is altered, then the abyss of Nothingness is spanned and made visible for a mystic instant, for nothing can change without making contact with that region of absolute being which the oriental mystics call Nothingness…1 In this way, the works on view, whether colorful or black and white, encourage viewers to look past the limits of their perception toward what might exist outside our human condition. Past love, nobility, and magnanimity, but also beyond hostility, deception, and anxiety.

Eva Pedroza, born 1982 in Buenos Aires, Argentina, is a multidisciplinary artist based in Berlin. She studied at the National University of the Arts in Buenos Aires and at the Berlin University of the Arts. Her work has recently been shown at feldfünf, Berlin (solo, 2021), with Goldrausch Künstlerinnenprojekt at Kunstraum Kreuzberg/Bethanien, Berlin (2020), at Literaturhaus Berlin (2018) and at Haus der Kulturen der Welt, Berlin (2016). From 2013-2017, she was awarded the Rosa-Luxemburg-Stiftung study scholarship, and the VG Bild-Kunst fellowship in 2021.