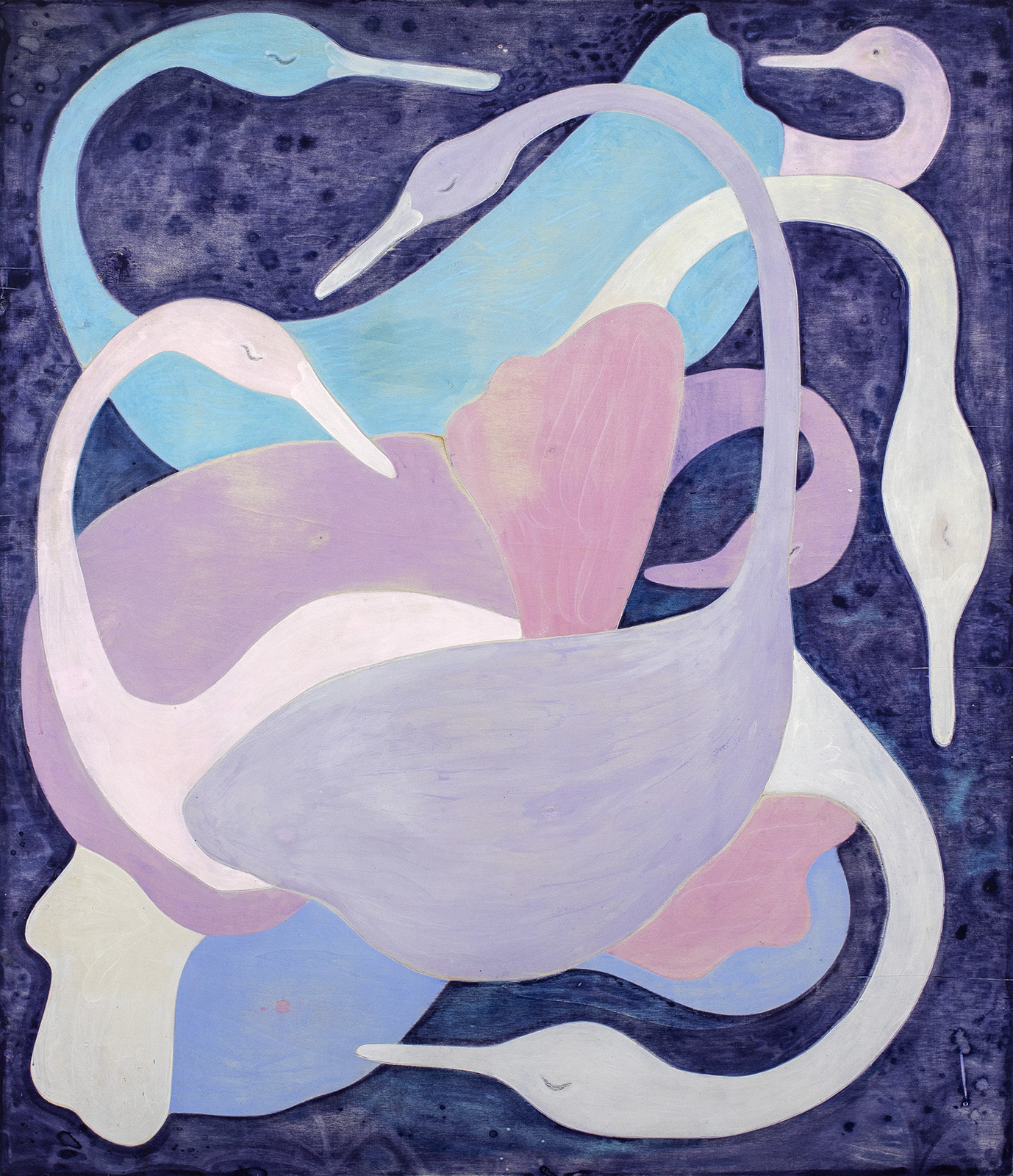 The exhibition has been inspired by the notion of the “emergency room,” a spatial and metaphorical concept that has emerged in light of the global ecological crisis. The term conjures up artistic responses to climate change, which have included speculative futures, apocalyptic dread, or survivalist imaginings, to name a few. “Breaking rules together” captures much of this polyvalent anxiety through paintings that project a feeling of enclosure, islands, or uncanny retreats. Within the image plane, many constructed dualisms blur such as the natural world vs. the contrived, built space of the interior. Instead, the paintings often contain scenes where both exterior and interior meld, creating an artificial mix that tips into the realm of science fiction.

Within the paintings, the depiction of the bird or natural environment is repeated, cut, or abstracted. Additionally, figures or rather bodies appear within a tightly clipped frame as if a camera has zoomed and thus, fragmenting the body such as in Pool (2019). The figure, here, is posed in front of a landscape that has departed from naturalism. Instead, purple clouds loom, concealing half of a moon. The man, who is perched on the side of the pool, is a wash of dark brown. His leg dangles into a pool of a blue dye without yielding a shadow or reflection. The largely fragmented aesthetics have been generated by a technique developed by Edvard Munch, where parts of a painting are cut up and then reassembled like a puzzle. This affect pushes the image further out of the plane of the real. In another painting Untitled (ducks) (2019), a woman is turned away in repose. Her head is turned, and the lines that delineate the side of her face have been slightly wiped away.

Many of Kjellesvik’s paintings contain washes of colors: blues that reveal a leg and then conceal a background plane. Or a plane of gray that becomes the ground for a bird to be rendered out of, as in Birds (2019). This gives the series of paintings an active rhythm but also a sense of world collapsing in on itself like a house of cards stacked with one setting off the balance. This rhythm hearkens back to the title “Breaking rules together” after the pioneer American abstract expressionist Helen Frankenthaler’s whose exhibition “No Rules,” a series of woodcuts also containing fields of color, also touched on its footloose mode of production –– Frankenthaler’s characteristic no rules when beginning a new painting. In Kjellesvik’s version, the breaking of orders also suggests an emergence of new space. However, in the breaking, certain chaos can ensue, potentially shaking normative structures.

This shaking of structures is echoed through Kjellesvik’s playful sculptural intervention made especially for the exhibition. The artist has brought branches collected at different sites in Berlin into the interior of the exhibition and laid this assemblage within the center of the space. The branches have then been painted in monochromatic colors. This gnarled wood would appear to be a nest or a trap or a form on which one can climb. Escape folds into enrapture, the essential paradox of survivalist dreams for life on an island.

The exhibition “Breaking rules together” was formed alongside a series of public projects, exhibitions, and collaborations that took place over the course of two years, between Berlin and Oslo. Such works include Poteten (The Potato, 2017) –– which the artists created as a part of the artist duo aiPotu, together with Andreas Siqueland –– Den høgreiste og havet (2018), and Roten (the Root, 2020). These sculptural works were formed in situ, often in remote nature and likewise blur the boundaries between the natural world and the artificial.