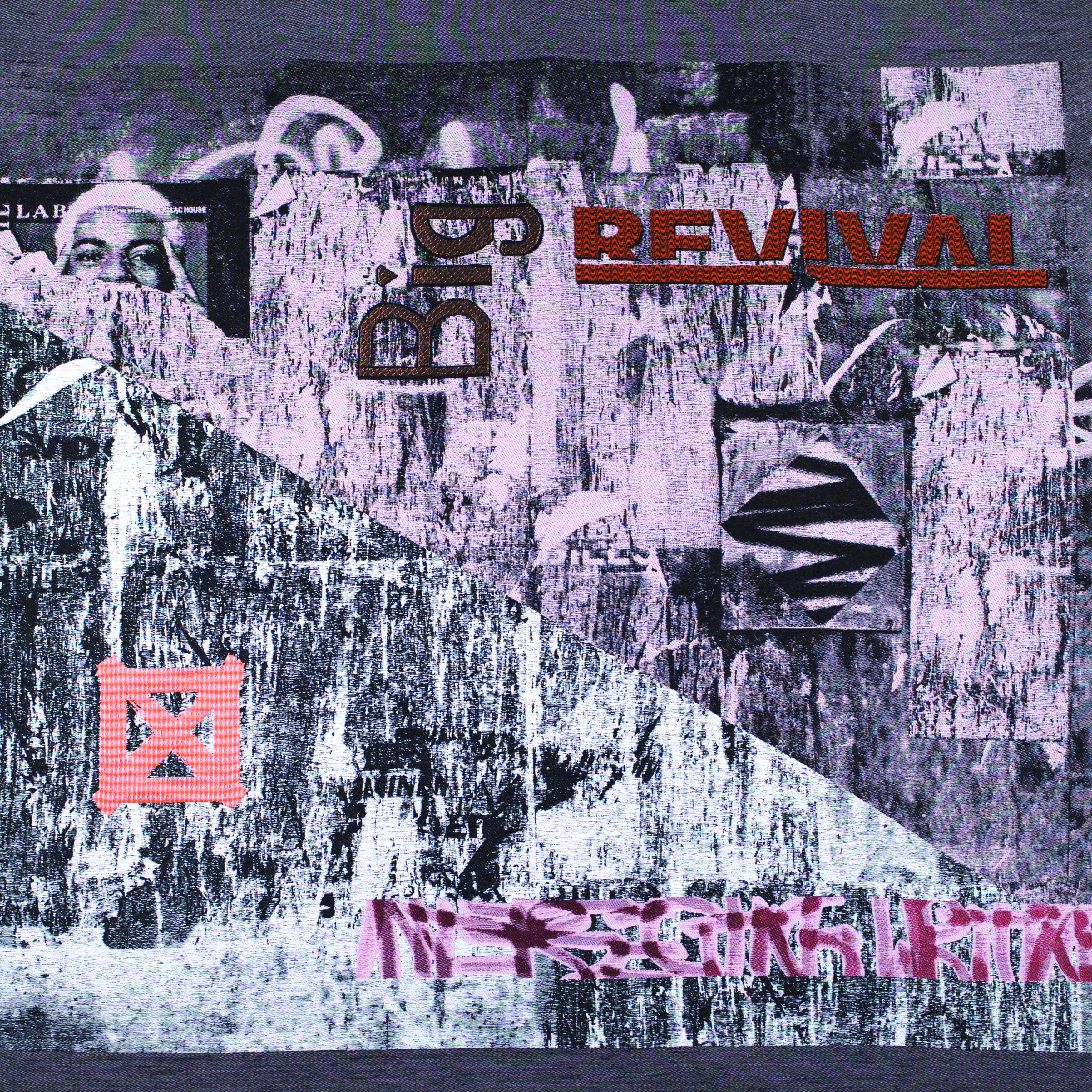 In her practice, Annette Cords focuses on the multidimensionality of weaving, as she makes incisive connections between text and textile, image and code, surface and structure. The work on display presents weaving as a rich, nuanced and often undervalued language that intersects and augments developments in writing, painting, and abstraction. In Let Them Paint , two paint drips filled with an op-art-like weave structures hover on the sides, as sweeping strokes of sprayed paint surround a cluster of signs proclaiming “ Let Them Paint .” By placing the vocabulary of painting into a woven syntax, the artist establishes parity between the two media and questions the hierarchies of art and craft. In 99 Cent Love , the vernacular language of weaving is paired with that of the street, setting up a correspondence and dynamic tension. The soft sensuousness of the tapestry contrasts with the hard voice of the city’s posted bills, as the words love and 99 cents are juxtaposed, while smiley faces look on. Both weaving and urban mark-making have long existed on the margins of the established art canon, and by merging them in her work, Cords connects their visual-textual languages and ability to carry cultural meaning.

Beginning a tapestry with her drawings and photographs, Cords adds, subtracts, and combines elements in Photoshop and Illustrator, and then continues to develop the piece in weave programs, where each pixel becomes a stitch, an interlacing of warp and weft. The language used to set up weave structures is straightforward and binary: the warp is either up or down. With the Jacquard loom, however, each warp thread moves independently, allowing for the fabrication of complex and intricate tapestries, and an almost infinite potential for mark-making. Also, on display, are weavings created on a 12-harness floor loom. Here, Cords reworks the historical context and the weave structures of traditional American patterns called Overshot. In Blooming Leaf of Mexico, the original name of the pattern connects to current political disputes, while the exploration of the weave structure engenders varied interactions of color and pattern and results in complex, geometric abstractions.

Cords’ deep engagement with the material and conceptual aspects of weaving pushes the medium forward and expands the discourse surrounding it. Charged with political and cultural allusions, the tapestry Big Revival connects the hopeful phrase with inner-city trouble, as the symbol for an abandoned building, an X in a square, lingers in the lower left. Cords makes weaving function on multiple levels at once, allowing it to speak to aesthetic, material, and cultural concerns, while she invites the viewer to look closely and construct new meanings.

The exhibition will open on Thursday, August 22 with a reception at 7 pm.

Art Week, an artist conversation will be held at the gallery on Saturday, September 14, at 6 pm. A catalogue with a text by Claus Mewes will accompany the exhibit.