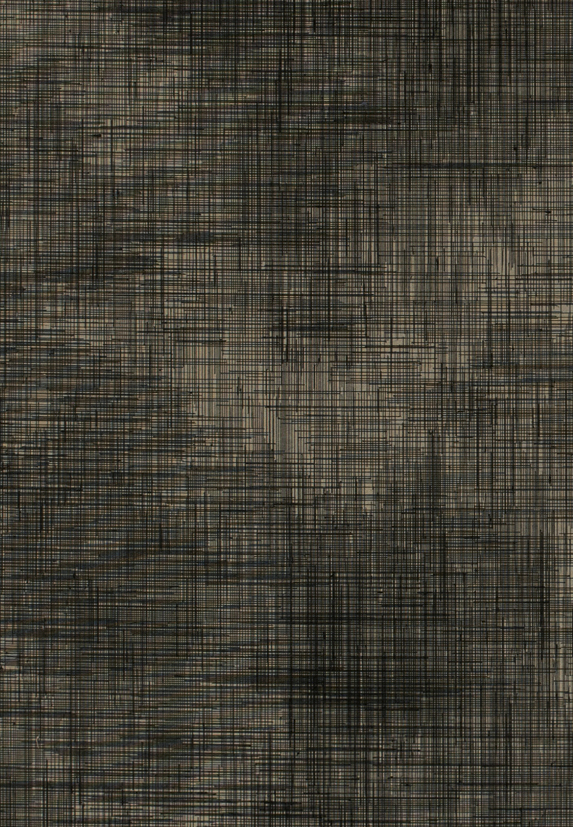 In Astrophysics, ‘dark matter’ describes a form of non-visible matter only perceived through its gravitational impact on the visible. Making up more than 85 percent of all matter in the universe, Astronomy cannot be thought without it. Just like it’s astronomical pendant, Saló’s works on view yield a form of ‘dark matter’ – not visible but vital to his practice.

It is the minimalist use of nothing but black acrylic paint and canvas within Saló’s most recent work, which strips naked the crucial relevance of his preceding act of painting. Applying his black lines with rhythmic progression, Saló’s movement is accompanied by the sound of a sharp tool on fiber. Each stroke follows the scores of the canvas as the artist slowly proceeds over the horizontally placed textile. Saló delicately accentuates the existing material landscape, making the creative process a tangible and transcending experience. Approaching the artist’s works, the meditative act of production is inscribed within the alternating density of lines unfolding an unexpectedly light and non-mechanic texture.

Thinking of the punishment of the Greek hero Sisyphus rolling a huge rock endlessly up the hill, Saló’s recurring task of drawing lines may seem infinite and ineffective. Albert Camus, however, describes this struggle as personifying the absurdity of human life, imagining Sisyphus happy, as the recurring endeavor is enough to fulfil one’s heart.

If attracted by the transcending nature of a Sisyphean task representing the absurdity of human life or the meditative qualities of a tangible progress, the viewer will find their own reflection somewhere between the lines of Saló’s ‘dark matter’.

JOAN SALÓ, born 1983 in Igualada, Spain.
He lives and works in Berlin, Germany.