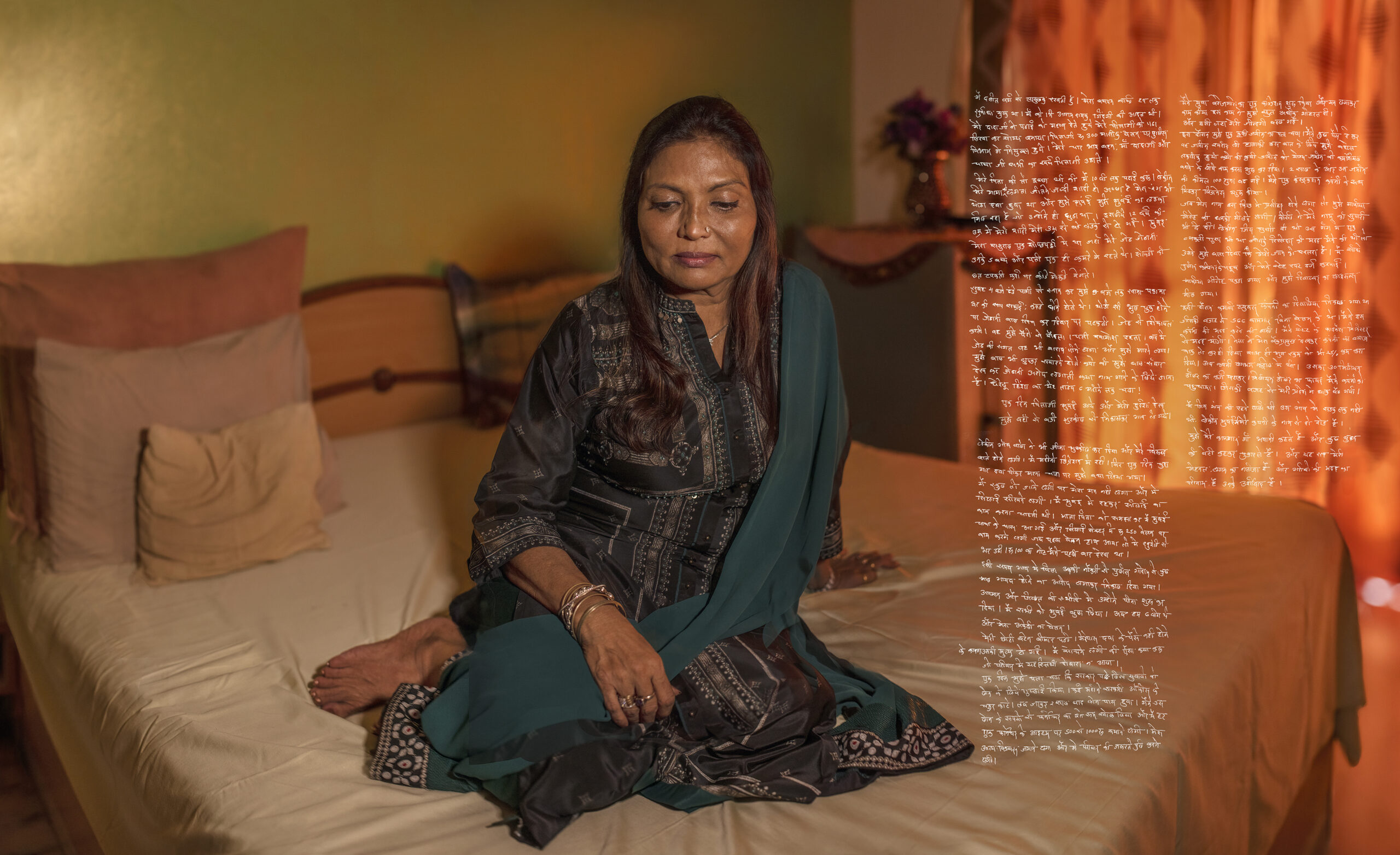 “The streets in my hometown had no names. Two streets in Bombay are named after me. There is an influential deity in India called Bhagavān or Bhagwan. I am called Mada Bhagwan. I have done what the gods could not. I have helped the poor and the despairing.”
– Dr. Kalpana Saroj

Persons Projects is proud to present Jari Silomäki’s new series The Affectionate Kalpana – My Story of Class Mobility which depicts the many different shades and outcomes of social class mobility. The selection of works presented in the exhibition consists of portraits, group pictures, and landscape photographs that the artist combines with text, written by the subjects in their native language, telling their life stories from their own perspective. Between objective documentation and subjective artistic perspective, this group of works introduces the viewer to the complexity of a global phenomenon that is still quite unknown to the western society. To further inform about this sociocultural matter, the series will be included in Silomäki’s latest monography Jari Silomäki: Atlas of Emotions.

Countries such as Malaysia, Thailand, and India, which are currently undergoing great economic transitions, experience a very rapid change in social structure. Due to these developments, the rate of class mobility has been increasing throughout the past decade, leading to new wealth and social status for a minor group of people that have previously been living in poverty.

Jari Silomäki started gathering personal stories of people who have experienced social class movement, thereby creating a collective narrative that tells one story with countless facets, but the same outcome: wealth and status. Even though only a small group of people is affected by this, they have gained a certain influence on their surroundings through catalyzing economic growth in the building, education, entertainment, and technology sector. Yet, the variety of stories shows that – depending on the country and gender – these people have struggled or still struggle with social acceptance, sometimes even being boycotted by long-term business and political elites in their home countries. The crony capitalism that cannot adapt to the rapidity of social restructuring processes, considering the ‘Nouveaux Riches’ as eyesores, undergoing the previous system and thereby leading to instability. Not descending from the upper class, the subjects’ families neither had wealth nor status. They are the first generation who achieved success and will pass it on to their children, thus creating a new elite of wealth.

Silomäki’s works represent stories of suffering and longing, of failure, frustration, and self-questioning that eventually turned into pride and success – how can one capture this flood of emotions in only one single photographic shot? As Silomäki’s artistic approach is rooted in both classical documentary and narrative photography, he has developed a unique way of storytelling, constantly finding new ways of exploring the limits of photography as a document. By juxtaposing intimate views into his subjects’ private homes with images of the essential places of their everyday life – such as high-end condominiums, glamorous boulevards, or sports clubs – Silomäki combines the outer and the inner world, navigating through psychological processes while capturing economic and urban development.

Yet in the end, it is the text that extends the documentative character of the photographs. This concept, which the artist himself calls „narrative documentarism”, could be linked to the works of Sophie Calle, who combines images with text in a similar way in order to re-narrate life stories. It is clear that for both Calle and Silomäki, the two parts are of equal importance since one cannot function without the other while maintaining the same artistic or political message. Hence, personal notes do not only offer something to reflect upon sociologically but also to identify with psychologically, like feelings of loss, expectation, or joy. In the same way that the artworks demonstrate that self-representation and wealth demonstration are clearly attached to cultural habits, they differ in how the subjects cope with sudden success. In the end, Silomäki’s works raise the question of whether the pursuit of happiness is inevitably connected to finances.

Jari Silomäki (*1975 in Parkano, Finland) lives and works in Helsinki. He graduated from the Aalto University School of Arts, Design and Architecture in 2007. Silomäki has held several solo exhibitions in institutions such as The Finnish Museum of Photography (Helsinki, 2020 and 2017) while group exhibitions include venues like Convento da Trindade (Lisbon, 2018) or Kiasma (Helsinki, 2016) among others. In 2017, he won the Finnish State Prize for Photographic Art. Silomäki’s latest publication entitled Jari Silomäki: Atlas of Emotions (Hatje Cantz, October 2022) will accompany the exhibition.